There are two mobile phone providers in Vanuatu; Vodaphone and Digicel. Mobile phone coverage is pretty good throughout Vanuatu if you are near a large village. If you want the best chance to have a working mobile phone and Internet while cruising in Vanuatu, consider getting both a Digicel and a Vodaphone SIM card. In both cases you pay as you use the service so the additional cost of having both is about 500 VT for the DigiCell SIM because the Vodaphone SIM card is essentially free (the purchace price of $10 includes $10 worth of credit. Digicel has the advantage of being able to update your account on line or with their app while Vodaphone requires you to find and buy scratch cards to renew your account balance.

What you'll need to have.

To use your existing phone in Vanuatu you will need:

2. The smartphone, tablet or USB key must have the 3G WCDMA Band 8 (900 MHz E-GSM) (Normal for Australia, New Zealand and Europe - not for US or Japanese phones).

If you want to make sure your phone will work in Vanuatu (providing it is unlocked) visit http://willmyphonework.net/

The phone or tablet or WiFi hotspot has to be unlocked or you won't be able to use it in Vanuatu.

Some American or Japanese mobile phones won't work in Vanuatu. Only ulocked phones will be able to use a Vanuatu SIM card so if you bought your phone from a telecom or mobile service you will probably have a phone locked to their service and you can forget about using it in Vanuatu except on roaming. Some services, like Vodaphone, will unlock your phone or modem for a fee but you need to do it while still in the country where the phone is registered. They can't change the frequencies, however.

You can buy a phone in Vanuatu for a reasonable price. But you can also buy an unlocked Android smart phone with the correct frequencies from eBay or one of the big online discount stores before you leave - then you can use it anywhere.

Stop your computer uploading and downloading in the background

Windows 10 and several programs constantly upload and download data without your knowing about it or letting you stop this abuse of your expensive mobile data limits.

Here's how to stop your Windows 10 computer from downloading and uploading in the background while you are cruising.

Mac computers also do Gigabytes of downloads automatically. In addition to slowing up your browsing the end result will often require updating lots of other apps. Here's how to stop your Mac from downloading and uploading in the background while you are cruising. 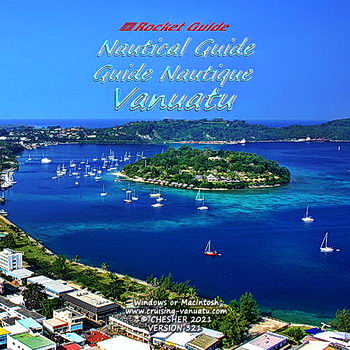 The comprehensive and accurate, easy to use, interactive Rocket Cruising Guide to Vanuatu. There are no other destinations in the world with cruising and tourism guides like the Rocket Guides to New Caledonia and Vanuatu. Plan your cruise in advance and have more fun when you arrive.